Up Coming and Recent Projects

I will be starring this summer in ﻿One Year Lease's﻿ show PEMDAS at the Edinburgh Fringe Festival. The show tells the story of a complicated affair between student and teacher. Check out tickets here.

I starred in a short film this summer called Lightning Bugs in a Jar. The film premiered at the Cannes film festival in May. It was recently announced that the Hollywood International Motion Picture Film Festival gave us 4 awards! We received Best LGBT Short, Best Editing (Sophia Betz), Best Cinematography (Timur Civan) and Best Musical Score (Megan McDuffee).

I will be performing on January 15th and 16th in CTC's (Convergence Theater Collective's) production of Babel. Babel is an ensemble driven movement/acrobatic piece exploring the creation of language and culture across generations. Check out our website here. 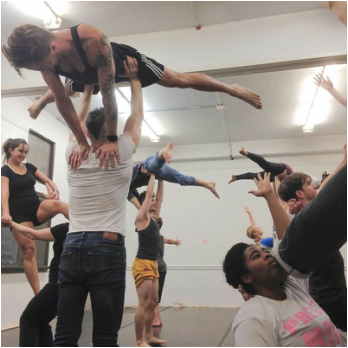 I  finished up an immersive dance theater production of Peter Pan that went up in Prospect Park. I played the role of the crocodile and will be portraying the role again next summer. The show was produced by Eva Dean Dance. To see photos click here